In the opening game of the Division 3 round robin, the Bears roared into action against the Lancaster Bulldogs: battling their way to a 14-4 lead at the end of the opening 10 minutes.

With the momentum in their favour, the Bears continued to push forwards in the second quarter: once again scoring into the double figures to move ahead by 24-10 at half time.

Rallying together, the Bulldogs hit back in the third quarter – outscoring their opponents by 16-10 as they fought their way back to within eight points of their opponents: 26-34.

Sensing the threat posed by their opponents, the Bears found another level of play in the final 10 minutes of the game to close out a 52-30 victory.

In the last Division 3 round robin game of Day 1, the Bears once again got off to a great start – storming to a 21-9 lead at the end of the first quarter.

Showing great teamwork, the Sheffield Steelers continued to make life difficult for their opponents, but it was the Bears who took a 39-17 advantage into half time.

The third quarter saw another strong quarter by the Bears, the Warwickshire team playing their way to a 58-25 lead with just one quarter left to play.

Capitalising on their opportunities, the Bears continued to push forwards in the fourth quarter: overcoming the gritty Sheffield team to close out a 74-28 win.

The Bears continued their strong form at the start of the last of the Division 3 round robin game: soaring to a 17-7 lead against Swindon Shock.

The Warwickshire team continued to find the basket at the start of the second quarter, but the Swindon team rallied together to come back within eight points of their opponents with just under five minutes left in the half: the Bears ahead by 20-12. Keeping their composure, the Bears then found a way to extend their lead to enter half time up by 36-18.

The Bears continued to push forwards in the third quarter, battling to a 50-32 lead with just 10 minutes left on the clock.

The final quarter saw both teams battling hard, but it was the Bears who closed out a 60-49 win and with it the top spot in Division 3. 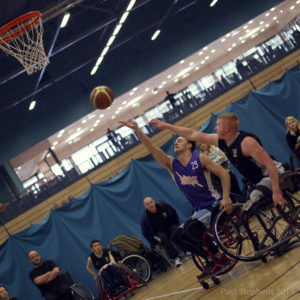