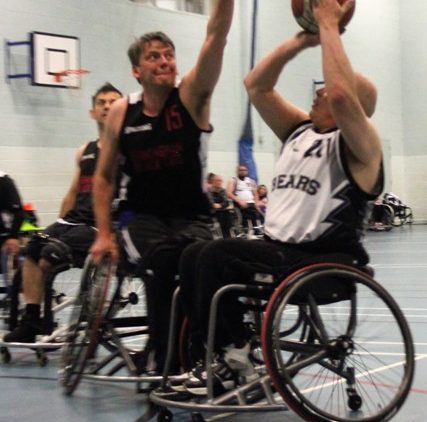 Bears played an unusual mid-week match this week as part of a re-arranged fixture away to Birmingham Blackcats. The Bears were looking to once again beat one of their local rivals who had, before this season, always been on top in their past exchanges.

From the tip off Blackcats were in a determined mood to reverse their last result against the Bears and went into an early lead but the Bears regrouped and upped their defensive game and pulled the scores back and took a lead into the end of the first quarter Birmingham Blackcats 14 – 17 Bears.

The Bears started the second quarter the same way they finished the last, putting Blackcats leading scorer Rob Smith under pressure whilst trying to take advantage of the possession that they gained in return. They began to pull further away from the Blackcats with the scores Birmingham Blackcats 24 – 39 Bears.

Blackcats started the second half strong trying to get a foot hold back in the game but again Bears turned up their defence to match Blackcats , whilst taking their opportunities at the other end and pulled further in front to end the third quarter Birmingham Blackcats 32 –55 Bears.

The last quarter was all about both team benches getting a run-out.  With the game virtually over, due to the lead the Bears had accumulated, both coaches gave court time to all their players and saw out the game with the scores Birmingham Blackcats 34 – 66 Bears.

After the game coach Masterson said “ I would like to congratulate the Blackcats on a great game, they fought all the way through and should be proud of themselves.  We didn’t play as well today as we can and I’m pleased that we can still win whilst not playing to our potential..”

The Bears 2 played their last away fixture on Sunday, taking on the Thames Valley Kings.  The Bears 2 were looking to keep their unbeaten run of 10 games intact and clinch the title of champions of the third division South and West.

The Bears started the game strongly with a solid defense limiting the Kings to only 4 points, whilst building a lead to finish the first quarter with the scores being Thames Valley King 4 – 12 Bears 2.

The Kings came out in the second quarter, with a stronger defence they were looking to try and pull back in touch with the Bears.  The Bears matched the Kings hard work and went into the half time break with the scores Thames Valley Kings 14 – 21 Bears 2.

The Bears 2 again came out fighting in third quarter again taking a strangle hold on the game whilst taking full advantage of the possession they obtained with their strong defence and pulled away even further from the Kings. The Bears went into the last quarter with a commanding lead of Thames Valley Kings 18 – 39 Bears 2.

With the game virtually won, the Bears were able to give their bench a run out and gain some court time. With both teams scoring basket for basket, the Kings were unable to get any closer and  the game finishing with the scores Thames Valley Kings 29 – 49 Bears 2.

Coach Masterson said after the game “I’m immensely proud of the team today for clinching the league title and qualifying for this year’s play offs.  Thames Valley Kings gave us a good game today, and with the players they are bringing along, they will be at the top soon.”