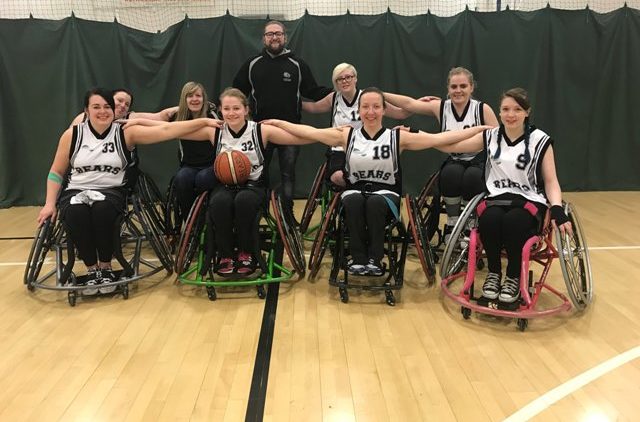 Bears WWBC travelled to Nottingham Wildcats Arena for the final weekend of the BWB Women’s league 2017.  The Bears had a tough game ahead of them, knowing that if they won would secure them top spot and promotion to the 2nd division, in only their second year playing as a team.  With only six available players this was again going to be a tough challenge for a unexperienced squad of players.

From the tip of the Bears were determined to try and limit the Bluestars , playing a strong defence and limiting the Bluestars main scorer Kate Dickings, from building any scores.   The Bears took full advantage and steadily built an early lead, with Anna Turney playing an MVP role to build up the lead.  At the end of the first quarter Bears were in command leading 13 – 7.

The second quarter was a close game with no team being able to convert the chances thy made, but the Bears again slightly won the quarter and extended their lead to 19 – 10 at the end of the first half.

The third quarter saw the Bluestars come out with a stronger defence to try and limit the Bears from going further in front, but the Bears matched their defence and the Bluestars could not break down any of the lead the Bears had built, and both the team went into the last quarter with the Bears still in a strong lead of 23 – 12.

The last quarter was a make or break end for the Bluestars and they gave it everything, slowly pulling closer to the Bears earlier lead, but with the clock against them. But the Bears resilient defence holding firm, the Bears seen out the game to become the division 3b champions and win promotion for the following season.

At the end of the weekend Coach Robinson commented.

” That was a perfect end to a good season for the girls, great commitment from everyone travelling up to Nottingham for every weekend of games and promotion was definitely earnt.  Now time to get the hard work in ready for next year.”

Team captain Aimee Hillson  was overjoyed with the result and said “ The team have played so well this season, and the addition of three new players has been brilliant.  We’ve gelled together as if we’ve been playing much longer as a team.  I’m so proud of the girls, and very excited for what the future holds for The Bears Women”