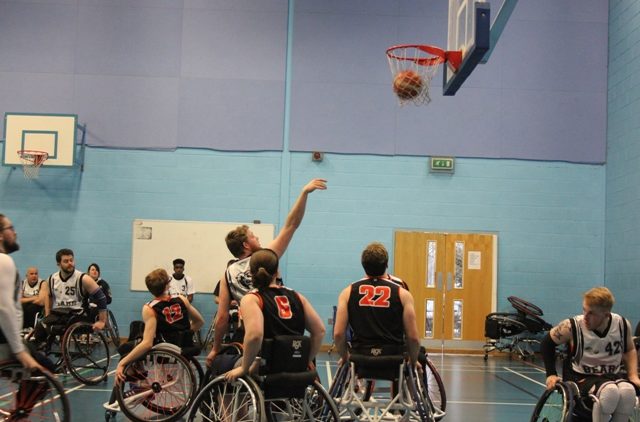 Bears topped off a successful weekend with a hard fought win against Exeter Otters at home on Sunday.  Following the individual achievement of Dan Gill, Ellan Fraser and the Bears women’s team, who all won honours at this year’s Stratford Upon Avon District Council Sports Awards, the eventual win from the Bears finished off an exciting and rewarding weekend.

As the ball came into play at the beginning of the game, the Otters showed why they had previously established themselves in the premier league, cutting through the Bears defence and racking up a sizeable lead in the first quarter, and leading the game Bears 8  – 19 Otters.

The Bears came out strong in the second quarter but were unable to find a way to stop Jordan Bright and …., who kept the Otters in the lead whilst holding Bears at bay in the defensive end,  and to go into the break with still a commanding lead of Bears 18 – 29 Otters.

The third quarter saw the fight back from the Bears who, having re-grouped, found an answer to Otters attacking force, whilst slowly chipping away at the score at the Otters basket.  The scores going into the final quarter were Bears 34 – 39 Otters.

The last quarter was an exiting end to a tough fought game, with the Otters holding the lead up to the final minutes of the game, when the Bears finally took the lead through Dan Gill and Ben Haigh, finishing the game with the scores Bears 53 – 50 Otters.

After the game coach Masterson said “That was a close call.  I’d like to thank Otters for such a great game that was fought all the way, till the final buzzer.  With Derek Hall and Ian Beach having to start today’s game, I think they were brilliant and helped us grind out a win”

The Bears 3 started the game day off, with a fixture against Jaguars 2, playing the return fixture after comfortably beating the Bears 3 earlier in the season.   With Coach Robinson giving Junior Para Athlete award winner Ellan Fraser her debut for the senior team, it was  a fantastic effort by the Bears 3 who were able to hold the Jaguars to a close score up to the half time break. Bears 3 23 – 29 Jaguars 2.

After the break, Jaguars 2 were once more able pull away from the Bears which gave to coach Robinson the option of playing the rest of the Bears bench.

Coach Robinson said after the game “This was a tough game that we knew was coming, but as always Bears 3 pulled together to deliver a fantastic performance from start to finish. I am pleased to have had the chance to put Ellan in for her first Senior match, and am impressed with the manner in which our developing players handled themselves against such fierce opponents.”