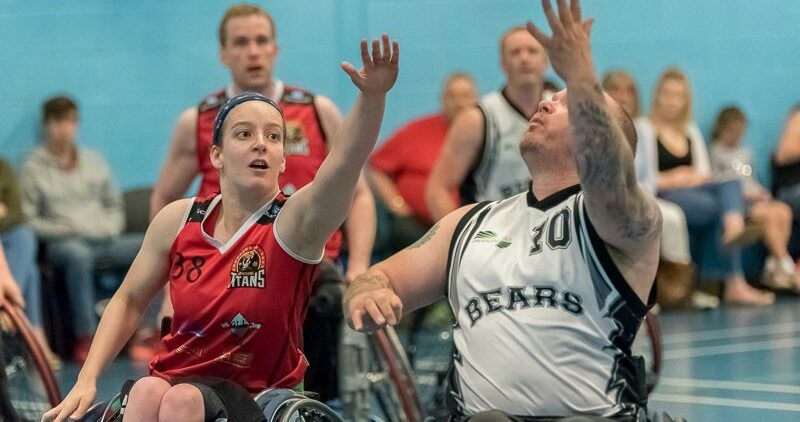 The Bears suffered defeat in their away fixture against Titans 2 on Saturday in a close hard fought game, that went all the way to the final minutes of the game.  The Bears were up against the team which finished runners up in the league last season, and knew that this was going to be a mighty challenge even before the game began.  The game started with the Titans taking full advantage of the height advantage they possessed, and built up an early lead in the first quarter to go into the second quarter with the scores Titans 2 17 – 12 Bears.

The Bears came out in the start of the second quarter with a press trying to limit the Titans forwards Chris and Andy Weeks, any chances at the Bears basket.  Whilst slowing down the Titans scoring, the Bears were unable to make any in roads into the Titans early lead and the teams went into the last quarter with the scores Titans 2 26 – 20 Bears.

The second half saw the Bears having to change their line up continually with a number of the team getting into foul trouble and this led to the Bears having to abandon their pressing game.   This allowed the Titans more opportunities at the Bears basket, but the Bears stepped up their attacking play and make a tiny in road to the Titans lead with the teams going into the Last quarter with the scores Titans 2 38 – 35 Bears.

The last quarter was a thrilling finish to a tough hard fought game with the lead changing between the teams a number of times, but eventually the Titans height advantage and the Bears players being in foul trouble led to the Titans to pull away and get a slight lead, with the Bears running out of time, the game ended with the Titans  winning Titans 2 51 – 45 Bears.

After the game coach Masterson said “ Congratulations to Titans and their coaching staff especially Andy and Chris Weeks who were awesome today.  We did well today with the team we had available, and all the players gave 100% today which is all I could ask of them.  Today was another learning curve to the players and myself, some of who have never played at this level before and they will learn a lot from today’s game.  We are still learning how to adapt to this division and we are making progress which is an encouraging sign.  Hopefully Titans will find it an even harder game when they travel to us in the New Year.”