The Bears sealed promotion to division 1 and revenge against Norwich Lowriders in Sundays game.  With three games still to play after today’s game, the Bears beat the only team who had beaten them this season and who could catch them for one of the promotion places up for grabs.  From the tip off Bears were determined to not have a re run of the season’s first game and dominated the Lowriders in defence whilst making their baskets count to go into the half time break with a comfortable lead of Bears 34 – 12 Lowriders.  The second half was again a story of Bears strong defence limiting the Lowriders to brief chances at their basket and keeping the scoreboard ticking along in offence.  The Bears utilising their full complement of players carried on their  relentless offence to pull further away to end the game Bears 79- 34 Lowriders.

After the final buzzer coach Masterson commented ” I’m really proud of the team today and all this season.  At the start of the campaign,  I gave them a goal of staying in the division after promotion last year and for them to go on and gain promotion again plus qualify for the play-offs is amazing.  We still have three tough games left and I hope they can carry on with these performances to the Play offs in June.” 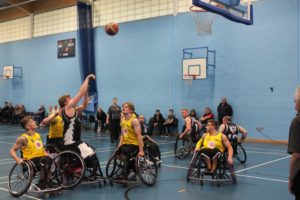