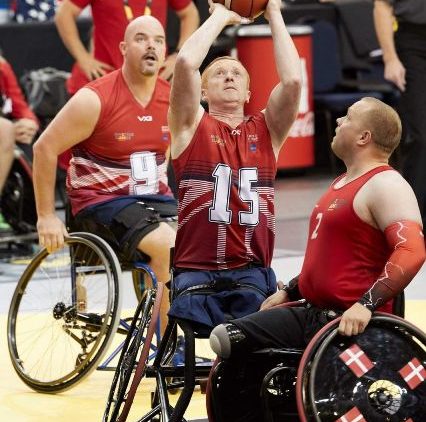 WARWICKSHIRE Bears player Dan Gill represented Team Great Britain, who went on to win the Bronze medal at the recent Invictus Games in Toronto Canada.  After being injured in Afghanistan, Dan started his basketball career with the Bears in 2013 and has gone from strength to strength. He has helped the Bears gain promotion whilst moving up through the various teams, culminating in being named for the Bears first team and gaining selection for this year’s Invictus Games squad.

The Invictus Team won all of their games in their group matches, beating New Zealand, Australia and Denmark which put them into a semi-final game against a strong Holland team.

In the semi-final the Great Britain team suffered a defeat to a strong Holland team, putting the British team into the Bronze medal game against Denmark.  In a tough battle, the Brits came out on top, with Dan Gill emerging as lead scorer for the British team, ultimately winning the Bronze Medal.  America were awarded Gold and the Dutch awarded Silver in the best final at an Invictus games.  An amazing competition with some spectacular basketball games.

On returning home, Dan relayed his thoughts on the experience, “Competing in the Invictus games was a massive honour for me to represent my country on a massive stage. To come away with a bronze was amazing; as a team we did amazingly well.  I couldn’t have done it without help along the way from my family, my local team Bears Wheelchair Basketball Club and the lads at Coalition Performance, so, a massive thank you to all these people!  And to have my new-born daughter there was unreal.  Many thanks to everyone for their support along the way!”

The Bears head coach commented  “As a team, we are immensely proud of Dan and what he has achieved.  With the progress he has made within the Bears club and also being selected for Invictus this year, it has been astounding, and it’s all credit to his hard work and dedication.  Hopefully another ex-service person will be inspired by Dan and the amazing Invictus team and will put themselves forward for future Invictus games ”

Bears also had more to celebrate on Sunday when the Bears 3 team played their first game in the National league, away to Wolverhampton WSC.  Although suffering a heavy defeat against a tough, more experienced Wolverhampton team, it was an opportunity to gain much needed experience for the newer players who made much-needed of Bears 3.  With junior players Aaron Grant, Jack Sheehy and Lydia Brocklebank making their debut, the Bears found the game tough from the start, but kept playing to the end to lose 58 -23.  After the game Bears 3 coach Jacob Robinson said:

“It is always tough to start the season with a loss but, considering that it is a new group of players who have never really played together as a team before outside of a training environment, it is impossible to be disappointed. Everyone played with passion and determination, and we have come away with plenty to work on. This will allow us to build and grow as a team as the season goes on.