The opening quarter to the Bears and Vikings’ Division 2 Semi Final saw the two teams stay within four points of one another throughout the first 10 minutes of the game; the Warwickshire team heading into the second quarter ahead by 16-14.

The Bears then continued to build upon the advantage to take a 32-25 advantage into half time.

The third quarter saw the Vikings hit back by 13-12; nevertheless it was the Bears who entered the final 10 minutes of the game up by 44-38.

The Vikings continued to fight back in the fourth quarter, levelling the game on 55-55 with just 32 seconds remaining in the game. Both teams showed fantastic composure as the clock ticked down, but a buzzer beater by the Bears saw the Warwickshire team edge a 59-57 victory.

The Division 2 Final treated spectators to another thrilling and nail biting game from the Bears.

At the end of the first quarter, Swindon had shot their way to a 20-11 lead against the Bears.

The Warwickshire team, however, rallied together in the second quarter as they fought their way back to within two points of their opponents: Swindon Shock ahead by just 34-32 at half time.

The battle continued into the third quarter, but the Shock were able to raise their game – extending their lead to five points: 47-42.

In an incredibly tense final quarter, Warwickshire Bears showed real teamwork as they completed the comeback: levelling the game on 53 points with just under four minutes left on clock. The teams continued to trade baskets, but – showing great composure – the Swindon team edged their way to a 60-57 lead and with a three point effort from Bears hitting the ring and not dropping in the last seconds of the game,  Swindon held on to the ball and ran out the clock to take victory. 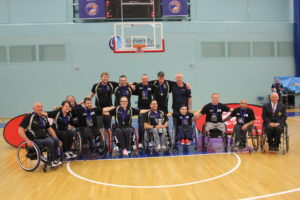