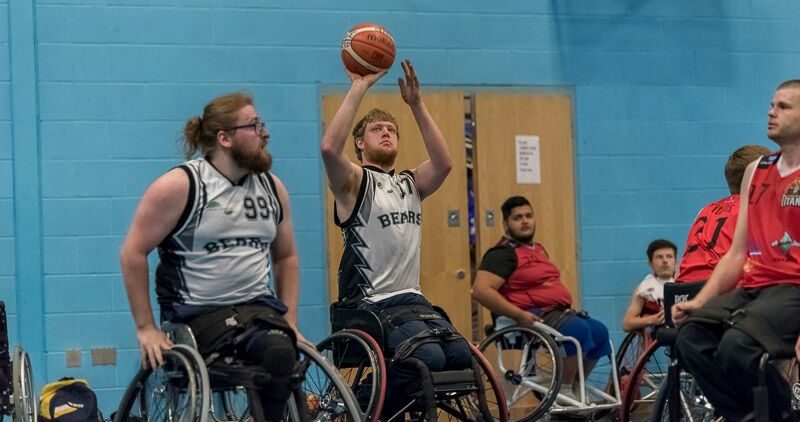 The Bears narrowly missed out on their dream of making it to the national playoffs for three consecutive years when the lost narrowly to the team who took the final spot, London Titans.  In a nail-biting and enthralling game that went all the way to the final buzzer, London Titans held out to finish in second place for 1st division South.

“The team are really disappointed at the moment to lose out today, but on reflection they should be proud of what they have achieved this season and how well they have done in their first year in this division.” said coach Masterson after the thrilling finish “For them to be disappointed in not making the playoffs shows the ambition of these players and the club and we will come back next season better and stronger and hopefully make another push for the top spot and play-off.”

From the tip off the Titans came out strong, breaking through the Bears defence and making their opportunities count, whilst the Bears found it hard to follow through on their chances to equalize. Titans took a strong early lead into the end of the first quarter Bears 8 – 15 London Titans.

In the second quarter, the Bears were able to start making some inroads to the Titans lead with Ben Haigh and Jacob Robinson starting to find their shooting range. Titans were able to match the Bears scoring and went into the halftime with scores Bears 21 – 31 London Titans.

The third quarter was once a close game with the Bears unable to claw back any of the Titans early success and both teams went basket for basket to set up a thrilling last quarter with Titans still in a slight lead  Bears 39 – 47 London Titans.

The final quarter was a nail-biting end to the high stakes game, with Bears making once last charge to try and get in touch with the Titans and were able to get within four points before the experienced Titans team were able to shut them out once again. The game going back in front with scores until the final buzzer, seeing the final score rest at Bears 49 – 56 London Titans.