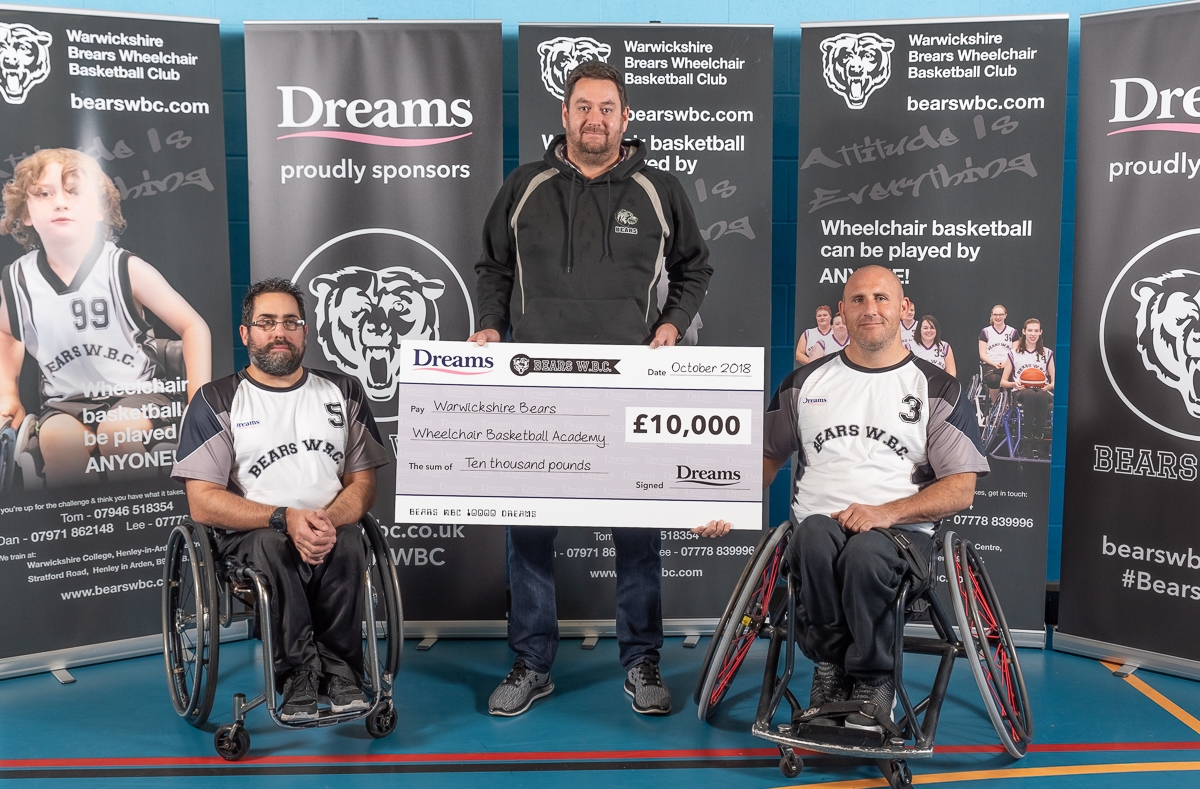 The Bears Wheelchair Basketball Club are elated to announce their sponsorship deal with The Dreams Company. Dreams, known nationwide as a leading manufacturer of beds and mattresses in the UK, have committed to donate funds in support of the Bears for two years. This generous donation will help the team compete in the national league as well as reinforce their ongoing endeavours to promote disabled sport in the local community, and encourage more local people to take up a new sport.  The Bears have entered four teams this season in the British Wheelchair Basketball League, as well a  women’s team.  The Bears have  also entered,  for the first time in their history, a junior team in the Lord Taverner’s Junior League.

Disability sports clubs such as the Bears are entirely charitable organisations, run not for profit on the basis of volunteer contributions and the support of sponsoring partners just like Dreams. Through their sponsorship, Dreams enables the Bears to continue their work; not only training and supporting athletes, but also supporting their local community.

“This is a fantastic news for our club” said Club Head Coach Tom Masterson.  “Sponsorship partners such as Dreams are fundamental to us continuing to do what we do here. In particular, Dreams will help with us develop the club, especially our junior section and women’s team. Their sponsorship will help us continue to develop the next generation of wheelchair basketball athletes.”

The Bears will start the season with their first team playing in the Premier League of the Great Britain League  after winning promotion last season.  The club has also recruited new faces to the squad, welcoming Tom Docherty, Daz Peasley and Theo Pilkington, three players with many years’ experience in playing at the top level.  The Bears also welcome Siobhan Fitzpatrick back to the squad, following her move to Sheffield as part of the Great Britain Women’s programme, most recently receiving a silver medal in this year’s World Championships in Germany.

For further information about wheelchair basketball, visit the BWB website at http://www.gbwba.org.uk/gbwba/index.cfm.

The Warwickshire Bears train at Warwickshire Sports College, Henley in Arden, on a Tuesday, Thursday and Saturday. For more information or to arrange a drop in to one of our training sessions, contact Head Coach Tom Masterson at: T.Masterson@bearswbc.com or by phone at: 07946518354