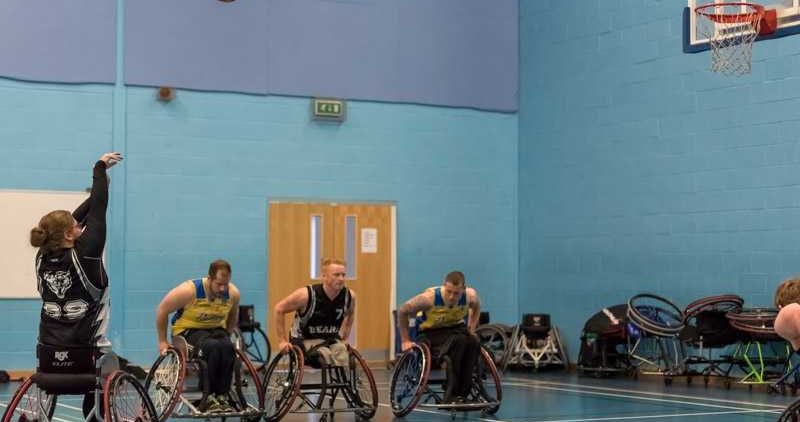 The Bears had a mixed weekend when they hosted Blackhawks as well as Sheffield Steelers 3 and 4 in return home fixtures from earlier in the season.  The Bears first team were facing the only team to defeat them so far this season, and were looking to try and reverse the result

From the tip off the Bears came out determined and, with Dan Gill on top form, took an early lead but a strong Steelers came fighting back to hold the scores close to only two points finishing the first quarter Bears 8  – 6 Steelers.

The second quarter again was a close game, with both teams defence coming out on top making the game a low scoring event, but the Bears were able to open their slight lead, even more, going into the half-time break with the scores  Bears 19 – 14 Steelers.

The third quarter again saw the Bears putting Steelers under pressure with their strong defence, and with Ben Haigh dominating the Bears rebounding, this gave the Bears the opportunity to pull further in front. The scores going into the last quarter were a close Bears 35 – 22 Steelers.

The Bears finished the last quarter strongly again, holding Steelers at bay to finish the game with the scores Bears 48 – 31 Steelers.

After the game coach Masterson said “That was a good win today against a very strong Steelers team who have a lot of good players on their team.  Our defence was outstanding today.  To hold a team as good as Steelers to only 31 points shows that. ”

In the first game of the day, Bears 2 were up against the current league leaders Blackhawks, who had previously comfortably beaten the Bears in their earlier encounter of the season.  Although losing again in this home fixture, the game took a far tighter form with the Bears simply unable to overcome a strong Blackhawks team.

Bears 2 Coach Derek Hall said after the finish “Whilst disappointed to lose, I’m happy with how well we played today compared to the last game.  I can definitely see improvements in the team and they did fantastic seeing as we were missing some key players today.”

The Bears 3 followed the Bears 2 when they faced the Steelers 4 team.  Although playing a spirited game the Bears were unable to hold a strong Steelers team who emerged as comfortable winners by the end of the game.

Bears 3 Coach Robinson said after the game “Despite taking a loss today, Bears 3 has continued to show the determination and teamwork that we have seen time and time again in this league. It is also heartening to see new player Ellan Fraser grow and develop so rapidly in-game scenarios. It’s hard not to be proud of them!”